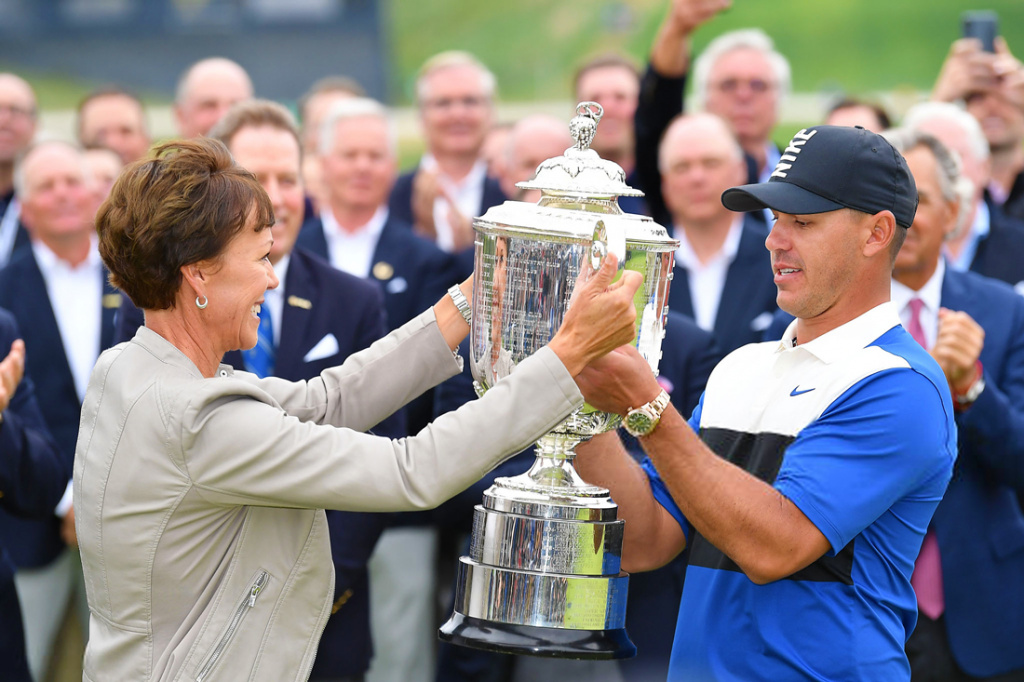 Champion full time. Brooks Koepka, even despite “4” on Sunday, won a tournament on golf of PGA Championship and returned on the first line of rating.

The field Bethpage Black only on Sunday showed the true complexity.

The best result of day – only 68 blows (we will remind that on Thursday Koepka put 63, and on Friday – 65), and lower than couple played only 11 golfers.

Brooks began to reduce a few turns on Saturday. He began to break blows with ти more often and on Green gave stalemates out of the blue: on the 9th hole in the third round he suddenly missed from two feet.

To its measures Koepka played very so-so and struck 70 blows, but nobody managed to use it: the separation as was seven points, so and remained it, persecutors just exchanged.

The most equal tournament was held by Dustin Johnson. It is only who struck every day less than 70 blows. Besides, it only who in each round did byord on a difficult 15th hole.

On average range Johnson the best became driving, but here on accuracy took only the 62nd place.

It is good to beat on 335 yards (it on average, and Dustin’s record – 369) – it, of course, but if balls at the same time depart to a high grass or the deep banker, then in what sense? At the same time the American who was never famous for a good patting this week perfectly “read” not the most difficult grina.

By the way we will note that Johnson it is noisy the public supported and regularly chanted: “Di-Jay! Di-Jay!”.

If not a phenomenal game of Koepka in the first two rounds, we for certain now enthusiastically would say about what was made by Johnson. If to take only days off, then Dustin applied less on six blows!

So it will be correct to tell that Brooks in fact won the title on Thursday and Friday, and then just kept overweight.

Sometimes hardly. Koepka seemingly surely went to a title, but at the beginning of the second nine on Sunday allowed four gods in a row because of inexact initial blows. Brooks was obviously nervous and could show nothing either ayrans, or the Father. Its overweight was reduced to one point, but at this moment Dustin helped.

On the 16th he at an aproucha got in раф, and then was mistaken from 7 feet at a stalemate on steam, then allowed similar inaccuracy also on the 17th. Two gods in a row deprived of it chances of a victory. Play it in one flight with Koepka, perhaps, to it and it was succeeded to force Brooks to be nervous more, and so the leader saw that not only he is mistaken, but also the main rival.

Besides Johnson began a round for 10 minutes earlier, that is Koepka was in more favorable situation.

At the same time he really was nervous about what he honestly admitted at a press conference after the victory.

On the 17th the new leader of the world ranking was mistaken from four feet and again allowed gods, already the fifth on the second nine!

Nevertheless, it had overweight in two blows before a final hole. Koepka played it steam and finished a tournament with result “-8”, at Dustin, respectively, “-6”, and at three golfers – “-2”.